** The pit area must be 30ft away from the flight line, even if you are on your own.**
This will avoid having to move the pit area if more flyers arrive.
These diagrams are for your guidance. Please be thoughtful and think about other club members.
Please think safety, yours and others! This page should be read in conjuction with the Field Rules Section
IMPORTANT: If the line of pits need to be extended due to number of members at the field
Please extend into safe, non flying area Do Not Extend The Pits Along The Patch 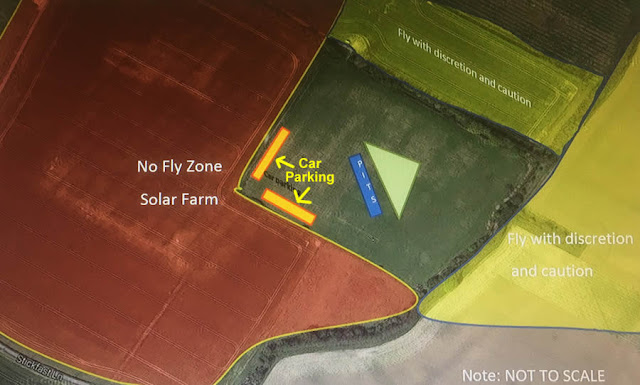 General
The Medway Model Flying Club is an affiliated member of the British Model Flying Association and is club number 2133. The Medway Model Flying Club shall hereinafter be referred to as the Club.
The statement of constitution and rules were adopted at the February 2003 Annual General Meeting (AGM) and amended at the December 2007AGM and supersedes and replaces all former statements of constitution and rules.
The aims of the Club shall be to unite modelers dedicated to the building, safe flying and enjoyment of all types of model aircraft, and from time to time to organise events at which the members may fly such aircraft.
To assist those modelers in the design, building and safe flying of model aircraft.

To liaise with and to represent the Club’s interests with other Clubs and Organisations.

To offer the services of the Club to other groups and bodies in connection with the organisation of meetings and events involving the flying of model aircraft.

The Committee consisting of Chairman, Vice Chairman, Secretary, Treasurer, Competition Secretaries, Safety Officers and one Ordinary Member will be elected by a majority vote at the Annual General Meeting. Members shall not be eligible to serve on the committee until they have fulfilled 3 years continuous membership. A welfare officer will be included in the committee as part of the clubs policy for The care and protection of Children and vulnerable adults.

5.    The Committee will, if they decide, co-opt further members as required.

6.    Any member of the Committee may retire on 14 days notice to the Chairman in writing.

Committee meetings will be held from time to time as deemed necessary by the Chairman.

10.   The yearly accounts will cover the period of one year commencing on a date decided by the Treasurer which enables a report to be prepared in sufficient time for the Annual General Meeting.

11.   The accounts prepared by the Treasurer will be audited by at least 1 ordinary member of the Club duly appointed and having knowledge in the constitution of such accounting procedures.

12.    In all matters concerning the management of the Club and the conduct of the membership, is at the sole discretion of the Committee, but views and votes, where taken will be fully considered when agreeing at a decision.
The Chairman will have a casting vote and his decision is final.

Membership
Members agree to abide by the Constitution and Rules of the Club by accepting membership.
14.Senior member, 18 years old and over

15.   A member may withdraw from membership of the Club at any time upon giving written notice to the Secretary.  Membership will be deemed to have ceased if any member has failed to pay his annual subscription by the 31st January in any year.

16.   In the event that a member breaks the club rules or his conduct on the field or elsewhere is contrary to the aims of the Club or is disruptive and behaves in a manner designed to interrupt the proper and harmonious conduct of the Club the action shall be as follows:

Action shall be taken where an incident is formally reported by at least 3 club members or 1 committee member.
Each incident shall be heard before the full committee.
The offender shall be given 1 verbal warning, 1 written warning and ultimately dismissal from the club.
Any serious infringement shall be brought immediately before the committee, which will make a decision accordingly.
17.   The Secretary will give notice to the member of termination of membership in writing and such notice shall set out in brief form the grounds upon which the decision has been taken.  The decision of the committee is final.

18.   Membership of the Club shall be limited to a number decided upon from time to time by the Committee.

19.   New members will be admitted when and if vacancies occur following the AGM in any year.

The Committee will select new members from a waiting list.
21.   Any keys fitting the field padlocks, which remain the property of the Club, must be returned to the Club when membership ceases.

22.  New members shall be required to serve a probationary period of 12 months. During this time their membership may be terminated for unsatisfactory conduct. Once a new member gains their MMFC flying certificate they may not teach nor instruct any other person until they have held a further 1 years membership.

23.  The committee reserves the right to refuse membership to applicants.

Guest’s shall only be allowed 4 active visits to the clubs flying fields in any one year and at that point shall be asked to apply for membership or not attend again.
Members shall notify a committee member prior to bringing a guest. Guests must observe all rules as though they are members of the Club.

A member may be made a life member for extensive services to the Club of any nature, wherein the members benefit from having such advice, services and presence of the life member. Life members can only be created by a majority ballot of all club members.

26. In the event of the Club’s activities being frustrated due to the loss of the flying field’s and no alternative is in prospect, the Club will be wound up twelve months or other time as decided by the Committee after the event.
If funds allow, the subscriptions shall be reimbursed. Any monies remaining will be donated to a suitable charity or charities decided upon by members available at that time.

Meetings
27.  The Annual General Meeting of the Club shall take place in November of each year and notification of it shall be sent to all current paid-up members.

28.  The said Annual General Meeting shall be conducted by the Chairman of the Club for the time being, who shall place before the members attending any matters which may in his view be properly discussed at such a meeting and in accordance with the following agenda: -

Any member wishing to present a motion for discussion must present it in writing 28 days before the meeting. A maximum of 15 minutes discussion time shall be allocated to each motion prior to a vote being taken.

29.  For the  AGM a quorum of members shall be 20% of the membership excluding the Officers and Committee of the Club.  (Amended 28th November 2012 )

30. Alteration or amendment to the Constitution and Rules can only take place at the Annual General Meeting of the Club and requires a majority of two thirds of the votes of the members attending the meeting.

31.   If any member wishes to discuss any matter affecting the effect or composition of the rules he shall advise the Secretary in writing 28 days before the meeting. It will be at the Chairman’s discretion whether the matter be discussed at an ordinary meeting or the Annual General Meeting.

Insurance
33.  As from the clubs affiliation to the BMFA, Insurance shall be as provided by the BMFA. The cost of BMFA membership shall be collected with club subscriptions during December each year. Any member who does not pay their subscriptions by the 31st of December will not be covered by BMFA insurance and will not be allowed to fly at any MMFC site. Pulse jet motors or any engines of this type must not be test run or flown on any of the clubs flying sites.
33a Any member of the club who wishes to obtain their own BMFA membership (country membership)  or obtains it through another BMFA affiliated club (their lead club) will only have to pay the club subs less the BMFA annual subscription. They will have to produce their valid BMFA certificate of insurance to the club secretary or membership secretary prior to their annual membership being confirmed.
33b Any “ excess” payments arising from any claim shall be the responsibility of the member making that claim and will not be the responsibility or be paid by the club.

34.  Each member by his acceptance of membership of the Club thereby fully agrees that no liability of any kind will attach to the Committee of the Club arising from and in any manner in connection with such insurance claim or such loss whatsoever.

35. It shall be the responsibility for each member to ensure that his operation of radio-controlled aircraft complies in every particular with any current legislation rule or official requirement governing, controlling, or appertaining to the operation of such model and each member accepts that the said insurance cover shall not protect him from loss if he is in breach of such requirements.

36.  Guests are to be under the supervision of a Club member, who shall be responsible for checking their insurance.

Flying/Field Rules
The Flying /Field Rules of the Club will be determined by the committee, and are subject to revision, taking into consideration the views of the membership, from time to time.  Such rules when revised will be issued to members as part of the periodic newsletters.
The care and protection of children and vulnerable adults
The clubs policy is to provide a safe environment for children and vulnerable adults.
All Junior members or visiting juniors must be accompanied by a parent or guardian at all times at any club flying site or meeting or function. The club Welfare officer will act as a contact point and will keep any club instructors or members informed of any bulletins or information issued by the BMFA concerning the training of children or vulnerable adults. He will also advise any club members of their obligations under the act, as described in the BMFA handbook . Club instructors who instruct children or vulnerable adults will be asked to participate in the voluntary CRB (criminal records bureau ) check offered by the  BMFA.
Email ThisBlogThis!Share to TwitterShare to FacebookShare to Pinterest

Established 1974 we are a friendly club based in Kent with a flying field near Iwade (Stickfast Lane)
We also have an online forum:
http://forum.medwaymfc.org.uk/